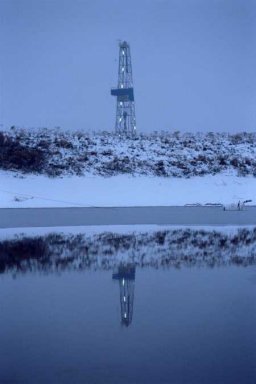 The reduced spending would imply that U.S. producers will drill 2,300 fewer wells this year than 2019’s total of about 16,400 wells. That would mark a 14% year-over-year decline, the company said.

Even so, the driller is expecting a “modest” increase in rig activity in the current quarter over last. It plans to run an average of 196 rigs for the quarter, the company said, versus 195 at the end of the last quarter.

The cautiously upbeat outlook comes as oil prices have plunged in recent days on growing concerns that a rising number of coronavirus cases will erode demand. U.S. crude futures were trading at roughly $50.41 a barrel on Tuesday, after falling below $50 at the start of the week, the lowest level in more than a year.

“We believe capital discipline by our customers will remain a prevailing theme, and we expect industry activity to look similar to the average level experienced during the second half of calendar 2019,” Chief Executive John Lindsey told investors on a quarterly earnings call, adding that would imply a modest increase from current levels.

Shares of Helmerich and Payne were up about 3.1% at $42.03 shortly after midday.

The company said it had increased its market share in U.S. land rigs to 24% from 22%, which it attributed to customer preference for its advanced drilling rigs.

“Most encouraging is (the) fact that both activity and pricing appear to be stabilizing in HP’s (Helmerich and Payne’s) primary U.S. land segment moving forward,” wrote analysts for Tudor, Pickering, Holt & Co on Tuesday.