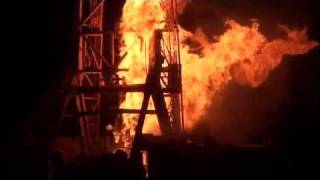 Nomac Rig #17 drilled into a shallow gas pocket soon after spudding in at a drilling depth of 900' northwest of Sweetwater, Oklahoma this evening around 6pm and burned to the ground. No injuries were reported.


Workers stated that they encountered the abnormally pressurized zone at relief time around 6pm when the relief crew was in the change house.

It was first thought that they had encountered a shallow air pocket but after testing with a "sniffer" (a device to determine the presence of hydrocarbons) the well soon caught fire.


Witnesses 3/4 of a mile to the north reported hearing a loud "boom" from their residence "and then it sounded like a jet engine was right outside our home". When they drove down to the drill site to investigate the well was discharging fluid, soon after that something ignited the gas and the rig caught fire.


Bar Hoppers (used to increase the mud weight and counter downhole pressures) were not yet rigged up. A gas separator, chokes and a BOP stack were also on location and waiting to be rigged up and tested as soon as the surface portion of the hole was completed.

Without these blowout prevention devices in place there is little to nothing that can be done to control the well.


It's very unusual to hit a shallow air pocket in the area and even rarer to encounter any hydrocarbons at this shallow depth above the planned surface casing.

El Reno based Nomac Drilling is a wholly owned subsidiary of Chesapeake Energy, one of the nations most active drillers.