A federal review commission has dismissed the main charge that worker safety officials brought against an oil and gas company for a 2018 Oklahoma well explosion that was one of the deadliest episodes of the shale drilling era. 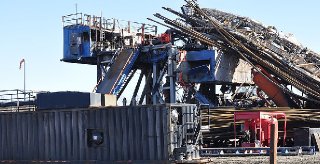 In a ruling that became final late last week, an administrative law judge ruled the Occupational Safety and Health Administration (OSHA) failed to prove Patterson-UTI Drilling Co. violated what's known as the "general duty clause" — a catchall provision that requires employers to provide a safe workplace, even if no OSHA standard was violated.

The decision highlights the absence of a federal safety standard for oil field work, a gap advocates and OSHA have sought for decades to close. Patterson will still pay a fine for other, specific safety violations.

"This is one more example of a tragic weakness in the OSHA law: The agency's standard-setting process is broken," said David Michaels, a professor at the George Washington University School of Public Health who ran OSHA during the Obama administration.

"A strong safety standard would save the lives of many workers," Michaels added.

The administrative law judge who decided the case indicated reluctance about dismissing the violation.

"There were numerous failures on behalf of the company men and by respondent's [Patterson's] employees that were avoidable and, in all likelihood, could have prevented this catastrophe," wrote Patrick Augustine, a Denver-based judge for the Occupational Safety and Health Review Commission (OSHRC), an independent federal agency that rules on disputes about OSHA citations and penalties. "Nevertheless, the court's ruling is bound by the law and evidence presented to it."

Augustine found Patterson knew of a hazard likely to cause injury or death but said OSHA officials failed to establish what the company should have done to avoid a violation.

His ruling was issued Feb. 12 and became an official order of OSHRC last week. The decision can be appealed to a federal appeals court. Neither Patterson nor OSHA has indicated whether it will appeal.

Patterson is the second-largest onshore oil and gas drilling contractor in the country. According to Augustine's ruling, it has about 4,800 employees and about 250 drilling rigs.

It has a troubled safety history in an industry known for a high rate of severe injuries and fatal accidents. Since 2008, when a Senate committee called the Houston-based company "one of the worst violators of workplace safety laws," at least 12 of the company's workers have been killed on the job. A lawsuit filed on behalf of the family of one of the men killed said Patterson had the second worst fatality rate among its corporate peers.

In a statement to E&E News on Friday, Patterson officials said: "While we appreciate the court's determination in our favor, we continue to remember the five men who lost their lives in this accident, and our deepest sympathies remain with their families. Nothing can make up for the tragic loss of life, and we remain committed to preventing an accident like this from ever happening again."

Patterson's Rig 219 burned for eight hours Jan. 22, 2018, after an explosion at an oil well site near Quinton, Okla., about 100 miles southeast of Tulsa. Patterson was drilling the well for Red Mountain Energy of Oklahoma City.

The fire killed Josh Ray, 35, of Fort Worth, Texas; Matt Smith, 29, of McAlester, Okla.; Cody Risk, 26, of Wellington, Colo.; Parker Waldridge, 60, of Crescent, Okla.; and Roger Cunningham, 55, of Seminole, Okla. The workers' bodies were found in the rig's control room. Three of the five worked for Patterson.

It was one of the worst catastrophes of the country's fracking-driven shale drilling boom, if not the worst. It was the deadliest oil field accident since at least 2010, when 11 men were killed in the BP PLC Deepwater Horizon explosion in the Gulf of Mexico.

An investigation by the U.S. Chemical Safety Board found alarms were turned off that could have warned the crew, and rig workers overlooked signs that large amounts of gas were pushing into the well. CSB's leader at the time called the Rig 219 tragedy "completely preventable," and its report said tougher government oversight could have prevented the lapses that preceded the explosion. Of 19 CSB recommendations to companies, industry groups and government regulators involved, six have been adopted.

OSHA announced six months after the blast it would seek $74,000 in fines from Patterson, citing its failure to maintain control of the well and other lapses .

Patterson contested the violations, and the case wound up before OSHRC reviewers.

Worker safety officials have long said the lack of an OSHA standard for the oil and gas industry makes it overly difficult to win cases against drilling companies.

Some compare it to a state trooper trying to enforce a law that people must drive safely, instead of a set speed limit, such as 65 mph. A North Dakota OSHA official who oversaw worker safety during the Bakken boom said the lack of a standard made enforcement "exponentially" tougher .

OSHA proposed a safety standard for oil and gas in 1983, saying the general standards "inadequately address the unique hazards" of the drilling business, and adding "this lack of adequate regulatory protection has contributed to the high number of deaths and injuries in this industry."

It withered under fierce opposition from industry, and the agency pulled the plug on the idea in 2001.

"The general duty clause is an inadequate substitute for actual regulations that make it clear how employers should protect workers in high hazard situations," Michaels said.

The Obama administration proposed ending the oil and gas industry's exemption from a safety program called Process Safety Management, which requires companies to adopt a more systemic approach to workplace safety. Oil companies opposed it as expensive and cumbersome, and the proposal fell off the agenda during the Trump administration.

The judge in the Patterson case did uphold more specific charges adding up to about $61,000 of the $74,000 penalty. Neither amount is likely to be consequential to the company, which had revenues of more than $3.3 billion the year of the explosion. The company's CEO voluntarily gave up $250,000 of his $14 million compensation that year because of the tragedy .

The reduction in the fine is not what matters for future safety and enforcement cases, Michaels said.

"When OSHA eliminates a citation or downgrades the seriousness," he said, "it sends a message to all employers that controlling the hazard is of less importance."

Numerous lawsuits were filed by men injured in the blast and the families of the men killed. Many were settled out of court, but an Oklahoma jury awarded $2 million from another contractor, National Oilwell Varco Inc., after finding it 10% responsible for the blast .