The biggest provider of oil and gas rigs to the U.S. shale patch is pushing a new pricing model as speedier drilling cuts into contractors’ revenue. 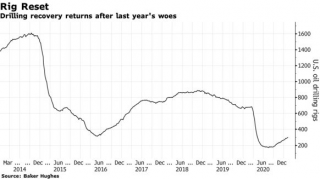 Rigs are typically rented out at a daily rate for a period of a few months, which has meant less money for oilfield service providers as drilling becomes quicker and more efficient. So Helmerich & Payne Inc. is touting a new pricing model based on overall well performance, and almost a third of its U.S. rigs are now being leased on that basis, Chief Executive Officer John Lindsay said Wednesday on an earnings call.

“The industry really has to evolve,” Lindsay said. “We’re really focusing on a lifetime value of that well bore for the next 10 or 15 years, and I think that is really drawing some attention. We’re seeing some opportunities to continue to grow these new models with our customers.”

After the worst crude-price crash in history pummeled the oil industry, the tussle between producers and contractors over the cost to drill and frack wells has taken on greater urgency. Explorers are under increasing pressure to cut spending and return cash to shareholders, and drilling is becoming vastly more efficient as a result.

In the Permian Basin of West Texas and New Mexico, home to the busiest shale patch in North America, operators are now drilling the same number of wells with 180 rigs as they were with 300 rigs a year ago, according to industry data provider Lium.

Helmerich & Payne argues that while some producers might balk at its new pricing model, the approach will deliver better value by keeping wells pumping for longer.

“We’re working hard to retire the dayrate,” Lindsay said. “At the end of the day, if we’re able to deliver better performance than they can working with Brand X, Y or Z, then that’s great for them and it’s great for us.”