Drilling and completions expert Patterson UTI Corp. is running 70 rigs today across the Lower 48, up three from the January average, and more equipment is likely to ramp up in the months to come, CEO Andy Hendricks said Thursday. 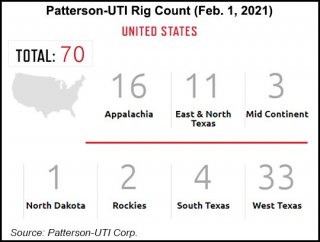 Hendricks, who discussed the outlook during a fourth quarter conference call, said the company’s rig count should remain “flattish” through the end of March.

“But it’s not a top, not a plateau,” he told investors. ‘It’s just where the quarter is going to land as we look forward to the rest of the year. I anticipate we’ll be putting up more drilling rigs.”

In addition, the rig dayrates are rising, with a forecast they will average $21,000/day in 1Q2021, up from the past couple of quarters.

“We thought that we would see a margin bottom for our business sometime around the fourth quarter or first quarter,” the CEO said. “Our visibility right now is that this is likely the first quarter, and that we should see improving margins throughout 2021.”

Management’s optimism about 2021 prospects is not based on where West Texas Intermediate (WTI) oil prices are trading today, he said, “but based on where WTI was trading earlier in the quarter.

“So, I’m actually somewhat encouraged a little bit, and if WTI holds in where it is today, then maybe even a little more upside than the way we had it viewed earlier in the quarter.”

Conversations with exploration and production (E&P) customers have led him to believe they are ready to get back to work following a miserable 2020.

“Drilling and completion activity improved during the quarter, marking what we believe to be the beginning of a recovery,” Hendricks said. “Based on our customer engagement, we are confident that activity levels will continue to improve.”

E&P completion activity in the Permian Basin improved sequentially during 4Q2020. However, that was not the case in the Northeast, where the company has a big presence in the Appalachian basin.

E&P completion activity in Appalachia slumped and remained static into the new year. The decline in the Northeast is not anticipated to improve before the end of March “based on discussions with the customers,” Hendricks said.

As a result, the company is relocating one of its dual-fuel spreads from the Northeast to Texas, where there is dedicated work, Hendricks said. Dual-fuel equipment relies on natural gas instead of the traditional fuel, diesel.

The dual-fuel equipment is a bonus for operators that can use their produced gas to power drilling and reduce emissions. The company also has an EcoCell lithium battery hybrid energy management system designed to reduce both fuel consumption and emissions.

Not surprisingly, the dual-fuel and pressure pumping systems “historically had been a Northeast phenomenon because you’re in the gas markets,” said Hendricks. “But we’re seeing more operators in Texas who are trying to deal with the gas production that they have in their fields and consume it” to avoid venting and flaring emissions.

With Texas E&Ps now in the dual-fuel market, “we’re encouraged by that opportunity to build a move down there” as customers look for an environmental edge.

In the contract drilling segment, the average rig count in 4Q2020 improved sequentially to 62 rigs from 60.

The company fetched an average rig margin of $7,770/day in 4Q2020, exceeding expectations. Relative to the third quarter, the rig revenue averaged $20,210/day. The revenue margin was negatively impacted by lower dayrates and the absence of lump-sum early termination fees from E&Ps that dropped contracted rigs.

Meanwhile, the cost to operate a rig increased to $12,440/day on average in the final three months because a smaller proportion of the rigs were idle but under contract. At the end of December, drilling rig term contracts were in place for $300 million of future dayrate drilling revenue.

As to whether the company has yet been able to squeeze higher prices for equipment from customers, Hendricks said that’s a no go for now.

“There’s certainly been no improvement in pricing, and we don’t anticipate any improvement in pricing in the first quarter. I think that as the rig count continues to move up through 2021, there will be an opportunity to push pricing and pressure pumping later in the year. So, we’re somewhat encouraged there, but it just hasn’t happened yet.”

The pricing drag was amplified by the lack of activity in Appalachia late in the year.

The pressure pumping business segment, which helps E&Ps complete wells, saw revenue climb in the 4Q2020 to $79.5 million from sequential revenue of $72 million in 3Q2020.

Seven active spreads on average were working, compared to five in 3Q2020. The sequential gross margin for pressure pumping decreased to $4.1 million from $8.3 million.

Market share was buoyed by the Mercury measurement while drilling system and Mpact directional drilling motor sizes, which were introduced early last year.

With the confidence that a recovery is underway, the company repurchased a portion of its senior notes at a discount during 4Q2020 and repaid half of its outstanding bank term loan, leaving only $50 million of total debt due before 2028.