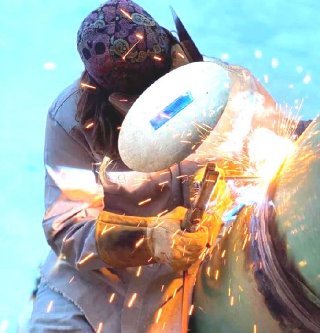 Oil and gas workers said they are on edge about what this means for their employment and the future of their fields despite the Gov. Greg Abbott Executive Order aimed to protect Texas' energy industry from federal overreach

David Hamm of Palestine is a union pipeline x-ray technician who worked on the first Keystone line in 2010. He said he was hoping to have the opportunity to work on the second line, those hopes have dissipated.

After a painful 2020, in which he only worked two weeks, he is hopeful to get back to the oilfield this year.

“I typically work 10 or 11 months a year, but last year, due to COVID-19 and the presidential election, things were extremely slow,” Hamm said. “I’ve learned to save my pay and make it last, however, I didn’t expect to be out of work as long as I was. So, I also had to apply for unemployment and I’ve been using my one-ton work truck to haul RVs for extra income. I’m hoping to get a call from the oilfield by March.”

Hamm said he is not sure how Biden’s order will affect the oil and gas industry, but is concerned as he awaits the call back.

“Union jobs, like the Keystone pipeline, are typically federal land lease projects,” Hamm explained. “Shutting down projects like this doesn’t only hurt the oilfield and gas workers, it also hurts the communities around these projects. When oil and gas crews are working in an areas, we typically buy local. The tax money from what we spend helps that local economy flourish. When you take that away, you take away civic and community growth.”

“These politicians on both sides of the fence have no idea how the laws they make are really going to affect people,” Hamm said. “I can’t just change my career field overnight. I’m not trained or qualified to do something else. And even if I could, I’m not going to be able to start out making even close to what I make now.”

Well-site geologist Pete Nunez, founder of the Oilpatch page on Facebook, with over 41,000 members worldwide, said he expects oilfield production to slow down due to Biden’s orders. Nunez is currently working on drilling sites just outside of Pecos.

“Right now, we have approved federal land leases we are working on,” he said. “After a significant slow down in drilling activity during 2020, due in large part to COVID-19 and possibly a little bit because of the presidential election, and the winter months that are always slower, we were expecting to see drilling pick back up in March. Now, it looks like we may see it slow down even more by May or June.”

Nunez has worked in the oilfield for over 20 years, experiencing four recessions.

“Right now, people are working,” he said. “But it could be only a matter of time before they start sending people home. I train a lot of trainees in the field and when they start talking about what they want to buy with the money they make, I always tell them to wait, to save as much money as they can for situations like these.”

Chris Hodge, a career oilfield welder, has a different opinion.

“Every oilfield worker should be ready for the oilfield business to collapse at any moment throughout their career,” Hodge said. “It’s always been unpredictable. Everyone gets warned about two things as soon as they get a job in the oilfield. They straight up tell you about the neglect your family feels while you’re working and to save some of your pay so you’ll be ready when the jobs dry up. You have to be ready at all times to get sent home. Work hard and save your money.”

Hodge said he believes the problem is more about the oilfield being overpopulated.

“When there is lots of work, everyone tries to work in the oilfield and they’ll work for low wages,” Hodges said. “They end up flooding the market, swamping it with too many breakout and rookie employees. The oilfield is already flooded with bad employees and a good purge is needed, but in reality a lot of good hands will get sent home instead. But, no matter what, the hustlers will find work.”

If history repeats itself, and Hodge believes it will, this could actually be a lucrative time to be in the oilfield.

“When oil prices bottomed out, they were all sharing memes about “I’d rather pay $3.50 a gallon than see my oilfield families go without,” Hodge said. “Well, here we are, the gas prices are going up and people are cussing Biden. I don’t like him, but people don’t pay attention. Production will go up with gas prices. Everyone freaked out when Obama became president,” Hodge said. “I heard of companies closing the doors just because he was elected. But I made a lot of money during Obama’s years in office.

“Tough times create tough people, and a lot of people have became soft because we are all super privileged compared to previous generations,” Hodge said.

The governor's order directs every state agency to use all lawful powers and tools to challenge any federal action that threatens the continued strength, vitality, and independence of the energy industry.

The order directs state agencies to identify potential litigation, notice-and-comment opportunities, and any other means of preventing federal overreach within the law.

Abbott also announced his support for legislation that will prohibit cities from banning natural gas appliances.

During the roundtable, he and participants discussed enhancing workforce development in Texas, cutting costly red tape, and expanding broadband access in rural communities.