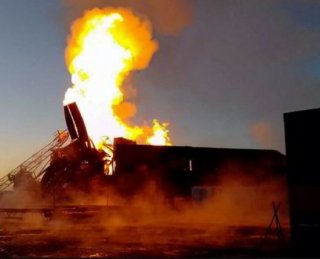 Russian authorities are battling a blaze following a blowout at an exploration well in the Orenburg region, where a regional oilfield services provider has just started making forays into becoming an oil producer.

Gain valuable insight into the global oil and gas industry's energy transition from Accelerate, the new weekly newsletter from Upstream and Recharge. Sign up here.

The blowout occurred on the Tallinsky block in the Grachyovsky district in early hours of Wednesday, according to a regional department of the Russian Emergency Situations Ministry in Orenburg.

Additional firefighting crew and protective equipment are being mobilised to the site in an attempt to extinguish the blaze, which has reached an estimated 25 metres in height, according to the department.

The fire involves a mixture of oil and gas.

The accident site is clogged with damaged drilling equipment and machinery that is preventing access to the burning well, with cold weather and strong winds posing additional challenges to firefighters, according to videos posted online by witnesses.

The department said the blowout had not led to any casualties, however, a worker from the drilling rig has been taken to a local hospital to treat burns to his wrists.

Authorities have also opened an investigation into the cause of the accident, but no initial reasons for the blowout have been provided.

At the beginning of last year, Russian authorities licensed the block to Otradnoye, a fast-growing oilfield services provider from the neighbouring Samara region.

Otradnoye quickly moved forward with plans to explore the asset, collecting 3D seismic on the block to determine a location for its first well.

The drilling of this well on the Tallinsky block was carried out by another Astashkin-owned provider, Neftegorskaya Burovaya (NBK), according to local media reports.