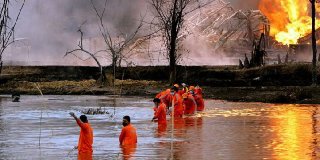 Several people, including a magistrate, have reportedly been injured in the latest protest against Oil India Limited (OIL)’s Assam oilfield blowout days after the state-owned operator finally capped and abandoned the ill-fated well.

OIL on 3 December abandoned the Baghjan-5 well in Tinsukia district but locals are still protesting, demanding compensation for damage caused by the blowout and subsequent explosion and fire.

Several people were injured during a protest on Saturday after police used tear gas and wielded batons to disperse demonstrators, the Press Trust of India reported.

Eighteen protestors were arrested in connection with the incident.

The Baghjan-5 well suffered a blowout on 27 May and on 9 June there was an explosion, resulting in a blaze that took months to bring under control, leading OIL to declare an emergency situation for “its internal control purposes”.

Three rescue officials died and five were injured while trying to put out the fire in two separate incidents.

“All the jobs pertaining to capping, killing and final abandonment of the well were successfully completed in the evening hours of 3 December,” OIL said in a recent statement.

The operator added the emergency declaration was then withdrawn with immediate effect.

The Baghjan field is located near to the environmentally sensitive Maguri Motapung Wetland and the Dibru-Saikhowa National Park, which are home to several endangered species, including hoolock gibbons, Gangetic dolphins and some 400 species of birds.

The Gauhati High Court on Monday stayed the environmental clearance given to OIL for its planned extended-reach drilling (ERD) operations at seven locations beneath the Dibru-Saikhowa National Park in eastern Assam.

“As per our commitment made to the apex court, we will not start our ERD operations before carrying out the biodiversity impact assessment study,” an OIL spokesperson was quoted as saying by The Hindu.

“ERD does not involve drilling in the national park. This is a technology that will enable us to explore crude or gas deep down horizontally after drilling vertically from a safe distance beyond the protected area.”

The High Court stayed the environmental clearance granted in May after the operator’s non-compliance of an earlier Supreme Court order, which requires the company to perform a biodiversity impact assessment.