A Santa Paula man has died following an industrial accident on an oil platform off the Ventura County coastline on Wednesday afternoon. 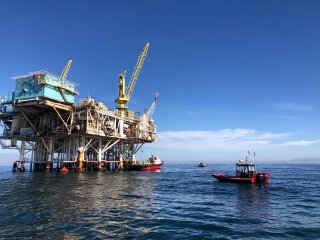 Miguel Aguilera, 44, was one of three workers who fell from Platform Gilda, an oil platform several miles off the coast, on Wednesday, according to the Ventura County Medical Examiner's Office.

His cause of death is still being investigated.

Vessels from Coast Guard Station Channel Islands in Oxnard, the Ventura Harbor Patrol and a local tow boat TowBoatUS responded to a call of a man overboard from Platform Gilda at approximately 12:07 p.m. on Wednesday.

“There was an industrial accident on the platform,” Ventura Harbormaster John Higgins said. “We provided medical aid and transport for two patients.”

Three workers had fallen from the platform from a height of between 30 to 50 feet. At least one had jumped to render aid to those who had fallen, according to Lt. Ben McIntrye, a Coast Guard public affairs officer

“When that person hit the water, he appeared to be unconscious,” McIntrye said. “In the sort of heat of the moment, two other individuals from the platform jumped in to assist him."

When the vessels arrived at the platform, they found one man unconscious and two exhibiting signs of hypothermia.

“The person who was unconscious was being held up by the other two individuals,” McIntrye said. “They got that person onto a lower level of that platform and hoisted him up.”

A member of the Ventura Harbor Patrol rendered CPR, including use of a defibrillator, to the unconscious man at the platform and as he was taken to Ventura Harbor, where paramedics from Ventura City Fire were waiting for the men.

“It was obviously a very chaotic situation with a lot of moving pieces and decisions being made on the fly,” McIntrye said.

Because multiple boats ferried the men to the harbor there were conflicting accounts of the exact number of persons involved.

Two men were transported to Ventura County Medical Center, according to Ventura City Fire Assistant Chief Matt Brock. One was unresponsive and in critical condition. One was suffering from hypothermia.

The third person refused further care, according to Brock.

A fourth man may have also been transported to the harbor and refused medical care, according to Higgins.

Platform Gilda is owned by DCOR LLC, according to McIntrye. The men involved were working on the platform. No one answered a call at DCOR's Ventura office Wednesday afternoon, and a message left Thursday afternoon was not immediately returned.

“They were most certainly working that rig,” McIntyre said.

The Coast Guard will be investigating the incident, according to McIntyre.

Platform Gilda is 8.8 miles off the coast of Ventura, according to the Bureau of Safety and Environmental Enforcement of the U.S. Department of the Interior. Gilda is in 205 feet of water and produced its first oil in 1981, the agency says.