Apache Pulls All Rigs from the Permian Basin-Others Could Follow


The major oil company Apache announced Thursday that it will be pulling all of its rigs from the Permian Basin. 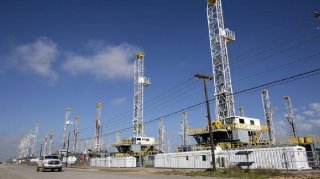 According to CBS 7, Apache announced it will reduce its Permian rig count to zero over the coming weeks, and plans to lower activity in Egypt and the North Sea.

The company says it has ample liquidity through its $4 billion undrawn revolver and flexibility to manage the $937 million of bonds maturing between February 2021 and January 2023.

Monday multiple oil companies around the Permian Basin reported major loses. Marathon Oil lost more than half of it's market value when it's shares dropped 46%.

Oxy or Occidental's shares went down to $14.66 which was more than $12 less than the day prior.

"I consider this as a $1 trillion stimulus to the world economy with a $30 oil price decline,” said Scott Sheffield. “We are preparing for two years of low prices and will make the necessary adjustments to maintain our great balance sheet.” He added that there could be many bankruptcies throughout the industries and tens of thousands of layoffs are to be expected in the next year.

With these major loses it could only be a matter of time before companies follow Apache.