International oil giant OMV could be millions of dollars out of pocket after accidentally cutting its own drill pipe while operating off the South Island coast. 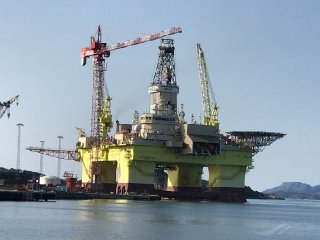 The incident occurred in late January when a blowout preventer — a device used to seal gas or oil wells and prevent hydrocarbons escaping — was mistakenly activated, the company confirmed on Tuesday.

OMV Australasia senior vice-president Gabriel Selischi said the preventer had been ‘‘unnecessarily engaged’’ during a test by crew on board the COSL Prospector drill ship.

As a result, the preventer had operated ‘‘as designed’’ and sheared off the drill pipe, which is being used to drill an $80 million exploratory well at the Tawhaki-1 site, 146km southeast of Balclutha.

However, Mr Selischi insisted there was no risk to the environment or the vessel’s crew, despite the mishap, as the testing was performed before the start of operations for the full-bore drilling programme.

‘‘At no point was there any potential for a release of hydrocarbons to the environment as the well was cased and cemented,’’ Mr Selischi said.

WorkSafe — as the regulator of well construction and drilling equipment — had been notified of the incident and received an initial incident investigation report, a spokeswoman said.

As a result, WorkSafe would be visiting OMV’s drill ship at sea ‘‘to ensure the incident is being managed appropriately’’, she said.

Maritime NZ’s ‘‘marine pollution and response service’’ was also made aware of the accident, and, after being given a copy of OMV’s internal assessment of the incident, agreed with its findings, a spokeswoman said.

‘‘As no oil was discharged into the water and because there was no elevated risk of an oil spill arising from this particular event, Maritime NZ does not require notification.

‘‘Damage to rig equipment does not fall within our jurisdiction unless it results in a spill or increases the risk of a spill or a loss of containment.’’

The Environmental Protection Agency confirmed it was also notified of the incident ‘‘as a courtesy’’ before a routine inspection last week.

It found discharges associated with the blowout preventer were within volumes permitted by OMV’s marine discharge consent for its operation in the Great South Basin.

‘‘If there was a spill of a harmful substance beyond what is permitted in discharge consents, then the EPA would investigate. No investigation of this matter is under way by EPA.’’

Earlier, a source — who declined to be named but was aware of the incident — told the ODT the mishap had forced a shutdown of the drilling operation while new parts were flown in from the United States.

‘‘It’s been shut down for days. It’s probably going to cost many millions of dollars.’’

An OMV spokesman, responding to those claims, said it was too soon to say what the financial cost would be.