Hours after a second worker died of injuries suffered in a Chesapeake Energy well fire in South Texas on Wednesday, the Oklahoma City-based company was sued by the mother of the first victim. 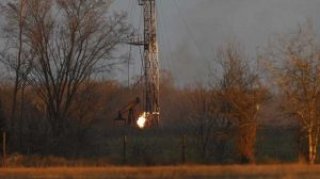 KAGS TV in Bryan, Texas reported the lawsuit was filed by Linda Milanovich whose son Windell Beddingfield died from his injuries in the blowout. She filed a temporary restraining order and a temporary injunction against Chesapeake Energy on Friday, a filing that came after the Thursday night death of a second worker. Her lawsuit was filed against the drilling company and the owner of well.

Milanovich, who is being represented by Zehl & Associates PC out of Houston, is requesting Chesapeake maintain evidence such as pictures, audio, video, emails, cell phone records, recordings and any other evidence in the blowout and post investigation. The court documents stated Milanovich is worried the company may try to alter the evidence and asked a judge for the temporary restraining order to stop them from doing these acts.

The announcement of the second death was made by Chesapeake Energy spokesman Gordon Pennoyer in Oklahoma City. But he did not identify the two workers who died in the fire.

Pennoyer said the blowout happened at the oil well  while workover operations were being done by company contractors, C.C. Forbes and Eagle Pressure Control. The fire happened near the Burleson County community of Deanville which is about 70 miles east of Austin, Texas.

Neighbors in the small community are shaken up after the incident.

“My prayers go with them tremendously… But I hope and pray with all of my heart that the ones that survived are going to be able to make a good life,” said Lynne Larkin, a nearby neighbor in Burleson County. “If they’re burned I don’t know. I know they LifeFlighted them but I say prayers for them every day.”

“This is why I don’t want any of this mess on my property,” Larkin said in a video she recorded of the fire and smoke behind her house Wednesday.

Larkin filmed it after she got home that afternoon. She has big concerns about all the drilling. Larkin said Chesapeake Energy wants to drill on her neighbor’s property close to her house.

“[Do] not allow them to come in and ruin your peace and life and have more, more rules and regulations on this stuff. [Do] not let them 200 feet from your house. That’s not far enough,” Larkin said.

While blowouts like this are rare, Larkin still worries about the future.

“I’m scared to death as to what’s going to happen if they put a well in my front yard in front of my house with my children, my grandchildren and my animals,” Larkin said. “The value of my home will go through the floor, but they can come buy it if they want it. That’s the only way I’m going to stop fighting them.”