Three workers suffered severe burns Thursday night in multiple explosions and a fire at an oil and gas site in southeast Wyoming. 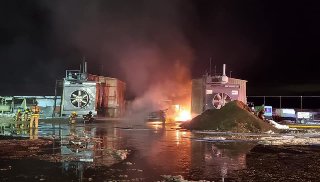 The workers sustained severe burns when an oilfield compressor station exploded west of Carpenter, according to Laramie County Fire District No. 4. One was airlifted to Western States Burn Center in Greeley, Colorado, said Laramie County Fire District No. 4 Fire Chief Scott Maddison. The two others were taken by ambulance to Cheyenne Regional Medical Center and then transported to Greeley.

"Those guys have a long road ahead," Maddison said Friday.

As of Friday afternoon, the workers were in stable condition and able to speak to their families.

Maddison received a call to respond to the incident at 7:28 p.m. Thursday. The one witness on the scene was an employee who did not sustain injuries. He heard a "pop, pop" and went to shut off the gas.

"When he turned around, he heard another explosion and it was like a huge fire ball," Maddison said. The fire chief was informed the fire was likely caused by a natural gas leak.

"The fire has been extinguished, and we appreciate the fast response of the local safety officials," a spokesman for the company said in a statement. "The incident is under investigation.

"EOG is committed to the safety of our employees, contractors and local communities. Three contractors sustained injuries and are receiving medical treatment. Our thoughts are with them and their families."

Laramie County Fire District No. 5 also posted about the explosion. It indicated it sent an engine, tender, command unit and six firefighters to the site.

Carpenter is southeast of Cheyenne, near the border with Colorado.