A grand jury in Anchorage on Tuesday indicted Baker Hughes oilfield service companies and a Baker Hughes manager on several counts of assault after five workers with a construction crew said they were injured in a chemical release during an incident that is alleged to have taken place in Kenai in 2014. 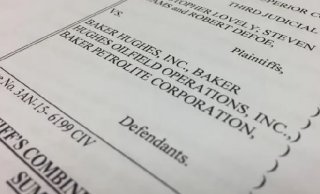 The 25 felony counts in the indictment include 10 counts of first-degree assault. The companies face up to $2.5 million in fines for the most serious charges if convicted, the Alaska Department of Law said in a statement on Wednesday.

John Clyde Willis, a manager for Baker Hughes, faces up to 20 years in prison and up to a $250,000 fine for the most serious charges if convicted, the statement said.

The indictment also claims that Houston, Texas-based Baker Hughes, along with Baker Petrolite, Baker Hughes Oilfield Services, and Willis, “failed to provide safety information regarding the chemicals used on site and failed to respond to repeated complaints by workers about the chemical exposures until May 8, 2014, when several workers were sent to the hospital because of a large exposure event.”

“The result is that five individuals have experienced prolonged serious physical injury including ataxia, memory loss, migraines, vertigo, respiratory issues, and tremors,” the statement said. Ataxia affects the nervous system and can cause slurred speech, stumbling and falling.

The state sued the Baker Hughes companies and Willis in May in state court in Kenai.

The alleged chemical release appears to be the same incident that led to a civil case before the Alaska Supreme Court. Oral arguments were heard in that case in August and the issue is “ripe for a decision,”

Bringing that case were Christopher Lovely, Steven Adams, Robert Defoe, Chuck Van Curren and Dustin Leavitt, who were working for UIC Construction when they were allegedly affected by the chemical release in May 2014. The chemical in question is RE31151CRW, a corrosion inhibitor.

The men sued Baker Hughes, Baker Petrolite, Baker Hughes Oilfields Operations, and Willis, who was dismissed from that case. The case has been appealed to the Alaska Supreme Court.

Attempts to reach the men Wednesday evening were not successful.