An early-morning oil rig fire in Karnes County is now out after forcing families to evacuate their homes. 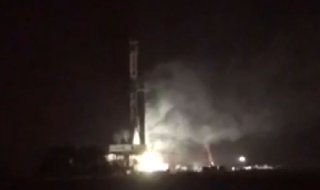 Eleven families living near the rig had to evacuated while fire crews from Runge, Karnes City and Kenedy fought the flames.

Villanueva says fire teams had the flames out by 6:15 a.m.

He says the fire caused no injuries and all evacuated families have now returned to their homes.

Roads around the fire scene also had to be closed, but the sheriff says all are now reopened.