Gravely injured and lying in a hospital bed in 2012, Todd Beason wondered if his life would ever be the same. A married father of three boys, Beason was a drilling rig supervisor for an oil and gas company. But while working on a rig site in Texas, another company’s employee improperly side-loaded an industrial crane which caused an 80-foot boom arm to free-fall, crashing down onto Beason. He suffered a life-threatening brachial-plexus injury, tearing apart the nerves connecting his spinal cord to his left shoulder, arm and hand. 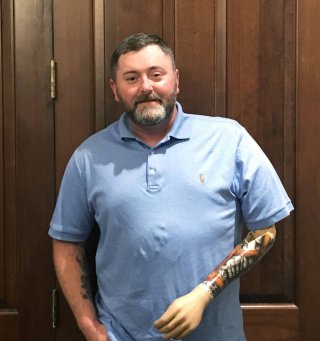 After extensive surgeries, two amputations and months of specialized medical treatment, Beason is permanently disabled and will require ongoing medical care and constant pain management the rest of his life. And it began an uphill, seven year legal battle that would ultimately overturn the Oklahoma statute governing an injured party’s ability to receive proper compensation for a debilitating lifelong injury and the resulting pain and suffering.

The Beason family sought experienced, highly-competent legal advice for their upcoming battle and chose the Abel Law Firm as their legal representatives.

Led by respected personal injury attorneys Ed Abel, Kelly Bishop and Luke Abel, the legal team began months of exhaustive preparation for trial. The Abel Law Firm communicated regularly with the Beason family, kept them informed of their preparation and what to expect in the upcoming days. But it was during the trial that the Abel’s care, skill and preparation really stood out to the Beasons.

“They did everything they said they would do … they fought so hard for us,” said Todd’s wife, Dara. “Luke, Kelly, Ed … all of them in the courtroom were absolutely phenomenal.”

In June of 2015, an Oklahoma County jury returned a $15 million verdict for the Beasons. Jurors allocated $9 million for Beason’s economic losses; $5 million for non-economic damages (i.e. pain, suffering, permanency, mental anguish and disfigurement); and $1 million for his wife’s non-economic loss of consortium claim. But their waiting wasn’t over.

Although the jury found no negligence on Beason’s part, the court was obligated to follow the existing state statute, reducing non-economic damages to $350,000 per person. The statute also forced the trial judge to reduce the judgment from $15 million down to $9.7 million: $9,350,000 for Beason and $350,000 for his wife.

However, jurors had not been informed of the $350,000 cap until the end of the court proceedings, after they had awarded a total verdict and allocated the damages into subsections. As such, jurors were unaware that their designation of certain funds as non-economic damages – often referred to as ‘pain and suffering’ – would result in the total monetary judgment being lowered.

Todd Beason remembers the juror’s reactions when told that their verdict would be substantially reduced. “Grown men and women came outside in tears,” he said. “One gentleman came up to me sobbing, saying, ‘We thought we were doing the right thing.  We thought we were taking care of you and your family.’”

Beason’s attorney, Luke Abel, said, “Jury members were clearly upset after learning the judge was going to impose a cap. The jurors were the ones who spent days listening to the testimony, not the politicians who passed this law. And this jury wanted to award fair and just compensation to the Beasons for all they had been through.”

Clearing up a statutory shortcoming

A statute is a special law when part of an entire class of similarly-situated persons is targeted for different treatment. The Oklahoma Supreme Court found that 23 O.S. § 61.2improperly distinguished between those severely injured and those who died from such injuries, since non-economic damages suffered by those who die cannot be reduced according to long-standing Oklahoma “wrongful death” law.

According to the court, the different treatment of the two groups was unreasonable and subsequently ruled unconstitutional. The court stated, “The failing of the statute is that it purports to limit recovery for pain and suffering in cases where the plaintiff survives the injury-causing event, while persons who die from the injury-causing event face no such limitation.”  The court found the groups were not just similar, but identical and should be treated the same.

“Capping non-economic damages only impacts those persons who have suffered significant, life-altering injuries. It’s wrong for a legislature to place an arbitrary cap on an injured person’s ability to recover without knowing the facts involved,” said Abel.

Seven years has been a long time to wait. But the family’s consolation is that the pain and suffering from Todd’s injury – plus the life-long medical bills, ongoing treatment and inability to return to his profession – will be eased somewhat going forward. They’re also pleased to have left a meaningful precedent for other injured Oklahomans.