Lawsuits were filed Tuesday in Pittsburg County District Court on behalf of the final two victims who lost their lives during the Patterson 219 rig explosion. 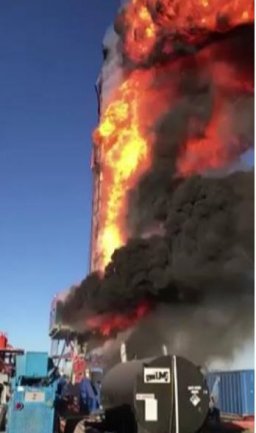 Attorneys filed lawsuits on behalf of Josh Ray’s widow and the estate of Cody Risk alleging negligence and more against the companies involved in the Jan. 22 rig explosion in Quinton.

Attorneys for the plaintiffs allege the lawsuits arose “out of yet another tragic preventable incident caused by irresponsible companies working in the oilfield who place money and profit over safety and human life.”

The same defendants were listed in the lawsuit filed on behalf of Charles Levi Brite — the conservator of Cody Risk’s estate. Attorneys also claimed the same allegations against the parties involved.

The lawsuits state Ray and Risk were in the doghouse — a building located atop the rig floor — when crews had drilled about 13,500 feet before an uncontrolled release of gas during the tripping-out process led to the explosion.

Attorneys allege that the Red Mountain supervisors on site at the time “were holding expired Well Control Certificates” and the company failed to inspect and maintain safe conditions, in addition to a failure to properly train employees.

The lawsuits allege the following against Red Mountain:

• failed to train employees and/or agents

• failed to provide rules and regulations

• breached the service contract by its failure to follow safety measures

• negligence for conduct of “company men”

Attorneys allege David Silcott, Andy Frey and Jim Brody Blagg were acting on behalf of Crescent Consulting during the events leading to the explosion.

The lawsuits allege gross negligence by Crescent Consulting as a result of omission and commission by company men, in addition to negligence by Blagg.

National Oilwell Varco supplied inadequate drilling fluids and technicians for the site and the company was negligent in its omission and commission, the lawsuit alleges.

The lawsuits alleges the following against Patterson-UTI

• negligence for failing to ensure safe working conditions, supervise work being done, to prepare a safe well plan and more

Attorneys filed a lawsuit March 2 in Pittsburg County District Court alleging negligence and reckless conduct resulted in the wrongful death of Waldridge. A second lawsuit related to the rig explosion was filed March 9 on behalf of Cunningham’s widow. A third lawsuit was filed March 14 on behalf of Smith’s widow.

The Occupational Safety and Health Administration initiated an investigation Jan. 24 and the U.S. Chemical Safety Board is investigating the incident.