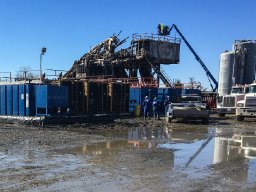 CSB is an independent, non-regulatory federal agency whose mission is to drive chemical safety change through independent investigations to protect people and the environment.

The agency’s board members are appointed by the President and confirmed by the Senate.

CBS has released the following:

The US Chemical Safety Board is in the early stages of its investigation into the fatal gas well explosion near Quinton, Oklahoma. Since arriving on scene on January 24, the following facts have been gathered:

• Red Mountain Operating (RMO) is the lease holder and operator of the well involved in the incident – referred to as the Pryor Trust 0718 1H-9 well.

• In drilling, the operator is responsible for the well’s design and the drilling program, which should account for well-specific conditions that could increase the risk or complexity of the drilling contractor’s various drilling and well control operations.

• Another well had recently been drilled by Patterson-UTI on this pad without incident. Drilling of 1H-9 began on January 11, 2018, and currently the CSB is unaware of any deviations from the original well plan. At the time of the incident, the rig crew had recently pulled the drillpipe and associated drilling tools out of the well in preparation to change out the drill bit.

• Both RMO and Patterson-UTI have cooperated with the CSB’s investigation and promptly provided the well plan, daily drilling reports, and electronic rig data.

• The CSB is currently reviewing that information and plans to interview eye witnesses and others present at the wellsite beginning as early as next week.

• Investigators will return to the site to continue their field work as key pieces of equipment are ready to be collected.

So basically CSB is saying what most of us already know.

1. Red Mountain is responsible for everything below the surface

2. Patterson UTI is responsible for everything above the surface

3. Both are responsible for well control and safe practices

CSB states that the daily drilling reports and electronic rig data has been turned over to investigators.

From this electronic data I would want to know from several hours BEFORE the trip up until the time of the blowout ; 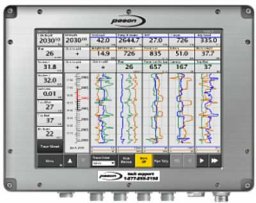 1. Pump Pressure -while drilling a loss in pump pressure is a possible indication of a kick

2. Pit Volume Total -an increase in pit volume is an indication of a kick. Mud has to be displaced from the well to the pits for gas to rise in the well

3. Gain/Loss -same as pit volume, any steady gain while drilling would indicate a kick

4. Flow % -an increase in flow is also an indication of a kick

5. What was the mud weight? "Mud Weight In" and "Mud Weight Out" would give an indication of "gas cut" mud. Mud returning from the well contains tiny bubbles of gas making it lighter in weight than mud going into the well.

The hole is filled each time this specific number of stands are pulled and the amounts recorded on the Fill Sheet. If the hole is not taking proper fill it should be considered and indication of a kick.

2. Trip Tank Volume-A "trip tank" is a small mud tank near the flow line used to fill the hole while tripping out of the hole. A trip tank is used as it is much easier to monitor accurately the amount of fill the hole is taking from a smaller, isolated tank.

3. Flow-There should be ZERO flow during the trip except when filling the well.

The above are the basic indicators of a kick. Gas wells don't blowout at the surface without first having an influx displace the mud in the well. Drillers are trained to monitor the above both while drilling and tripping.

So one has to ask these additional questions

1. Did the BOP's pass inspection and testing prior to this blowout?

2. How many units of gas was the well logging?

Connection Gas-A brief influx of gas that is introduced into the drilling fluid when a pipe connection is made.

Trip Gas-Gas en-trained in the drilling fluid during a pipe trip, which typically results in a significant increase in gas that is circulated to surface. This increase arises from a combination of two factors: lack of circulation when the mud pumps are turned off, and swabbing effects caused by pulling the drill-string to surface.

A gas influx in oil based mud can be more difficult to detect and requires the well be monitored closely.

3. Well Control Certification- Were the Consultant for Rocky Mountain and the Driller for Patterson UTI  current on well control certification?

4. Was the presence of pressure observed at the Chokes before opening the Blind Rams? 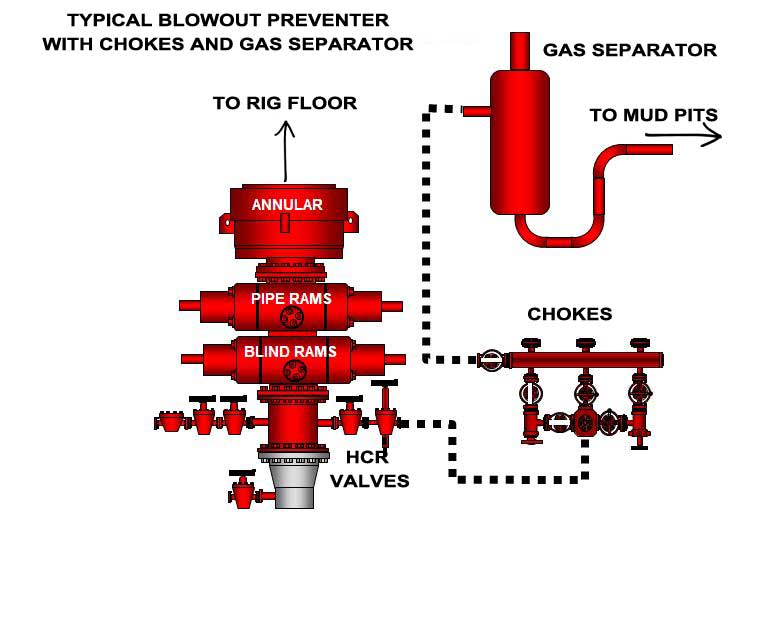 In the above drawing- after removing the drill string from the well the "blind rams" are closed completely sealing off the well bore. Below the blind rams are a hydraulically operated HCR valve as well as a manual valve ( redundancy in case of a valve failure)

The chokes are operated from a remote console on the rig floor. The choke console also has large pressure gauges displaying the pressure on the chokes at any time.

The gas separator separates the gas from the drilling fluid. The gas is routed off to a flare line where it is burned off. The drilling fluid is returned to the mud pits.

Those lost were all found in the "Dog House" which is the location to be when blind rams are being opened. This indicates to many that the rig crew was in the process of opening the blind rams at the time of the explosion. So the question is why did they open the blind rams with deadly pressure behind them?

I am really hoping someone at CSB checks the position of this manual valve during the investigation.

I will continue to follow the investigation and make the facts know as they become clear.